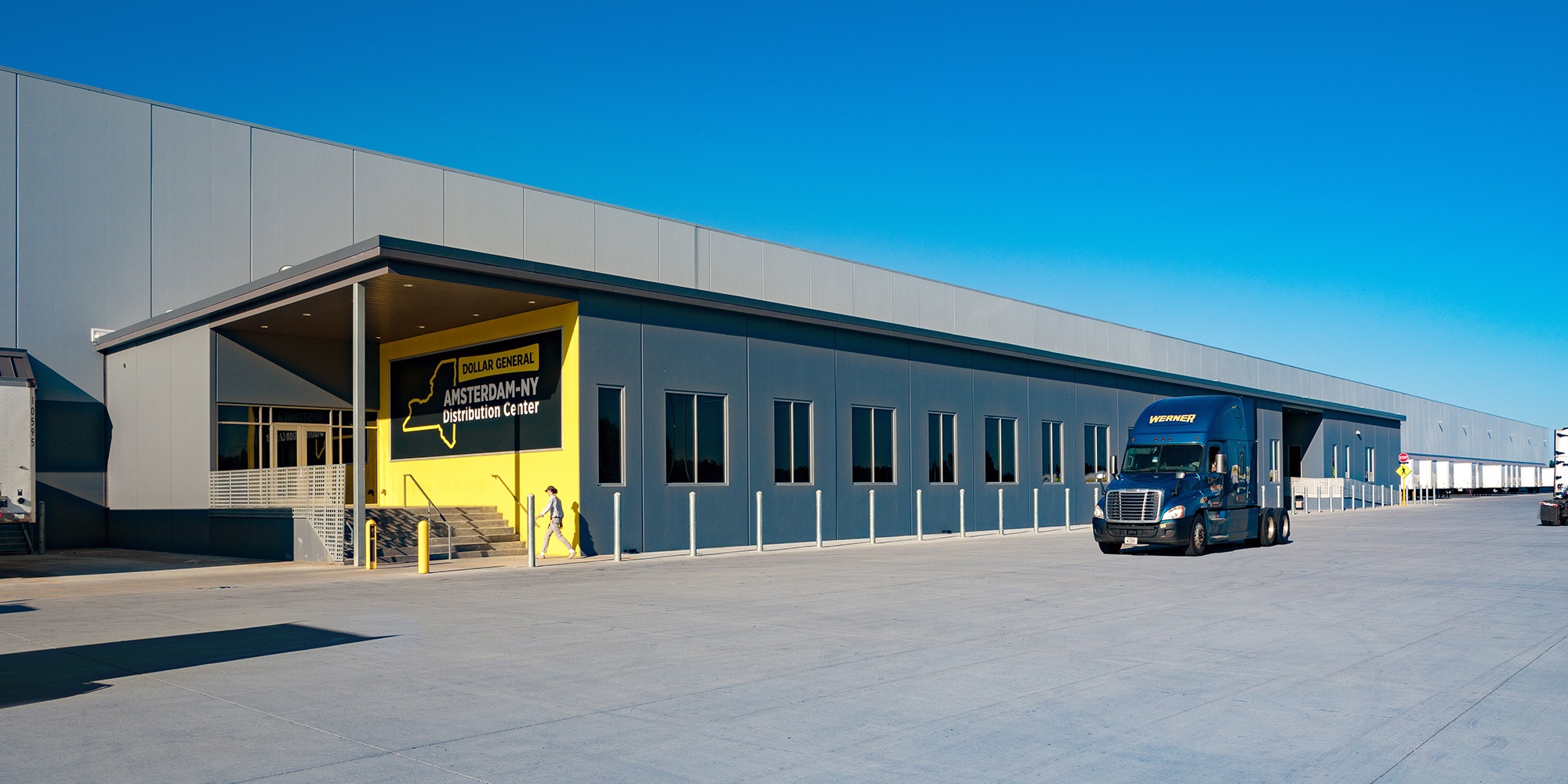 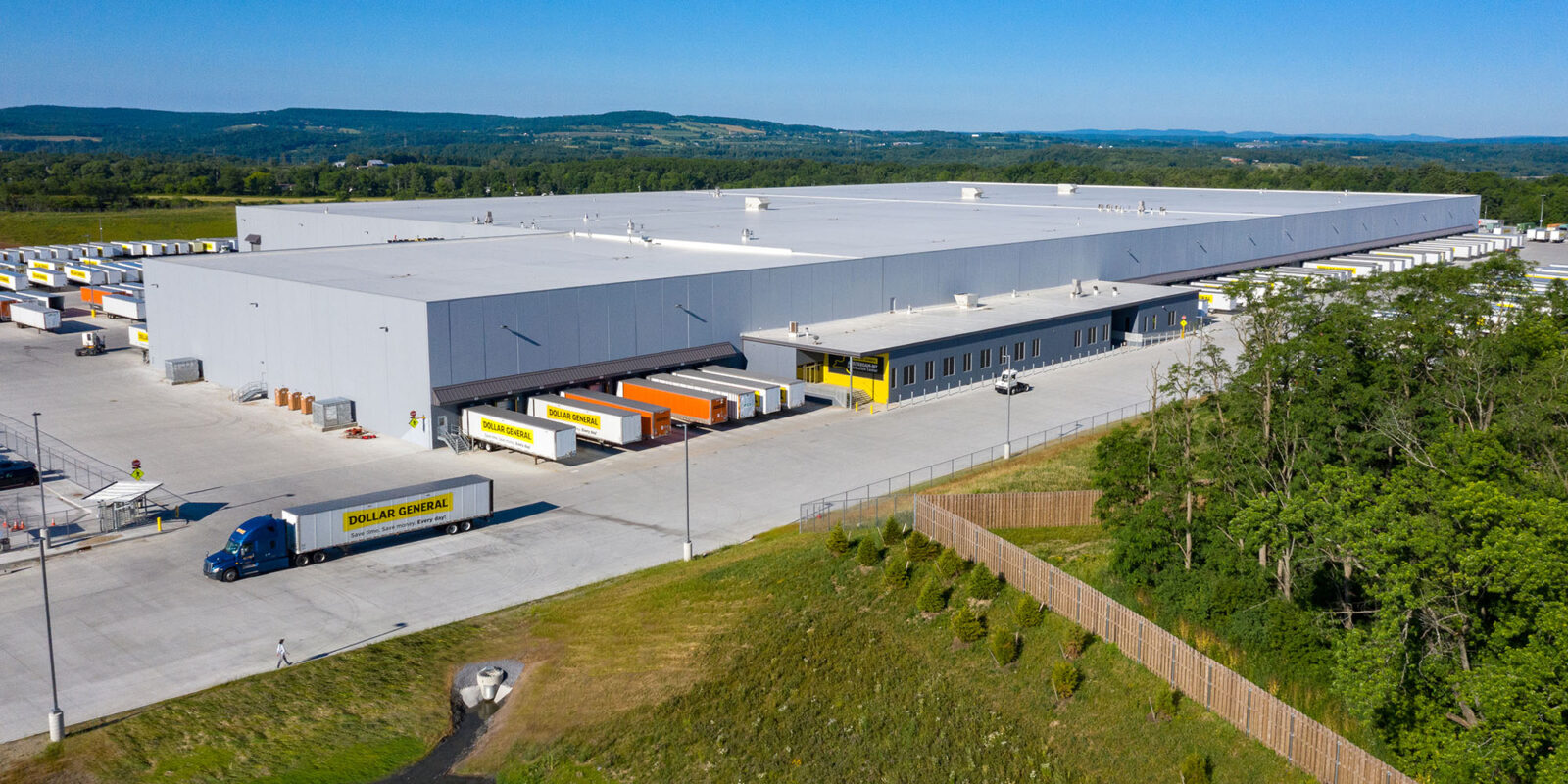 Marcie Weslock was the lead civil engineer on a 103-acre site for the development of a new distribution center for Dollar General in Amsterdam, NY. Site is currently under construction. Site design included a 767,000 sf distribution center, as well as outbuildings including, guardhouses, truck maintenance facility, fire pump house and reservoir, and dispatch facility. Design includes site layout for truck circulation, trailer parking, employee parking, and tractor-truck parking including coordination with the NYSDOT for connection to State Route 5S. Stormwater management include three large detention ponds that greatly reduce the peak flow to improve downstream impacts. 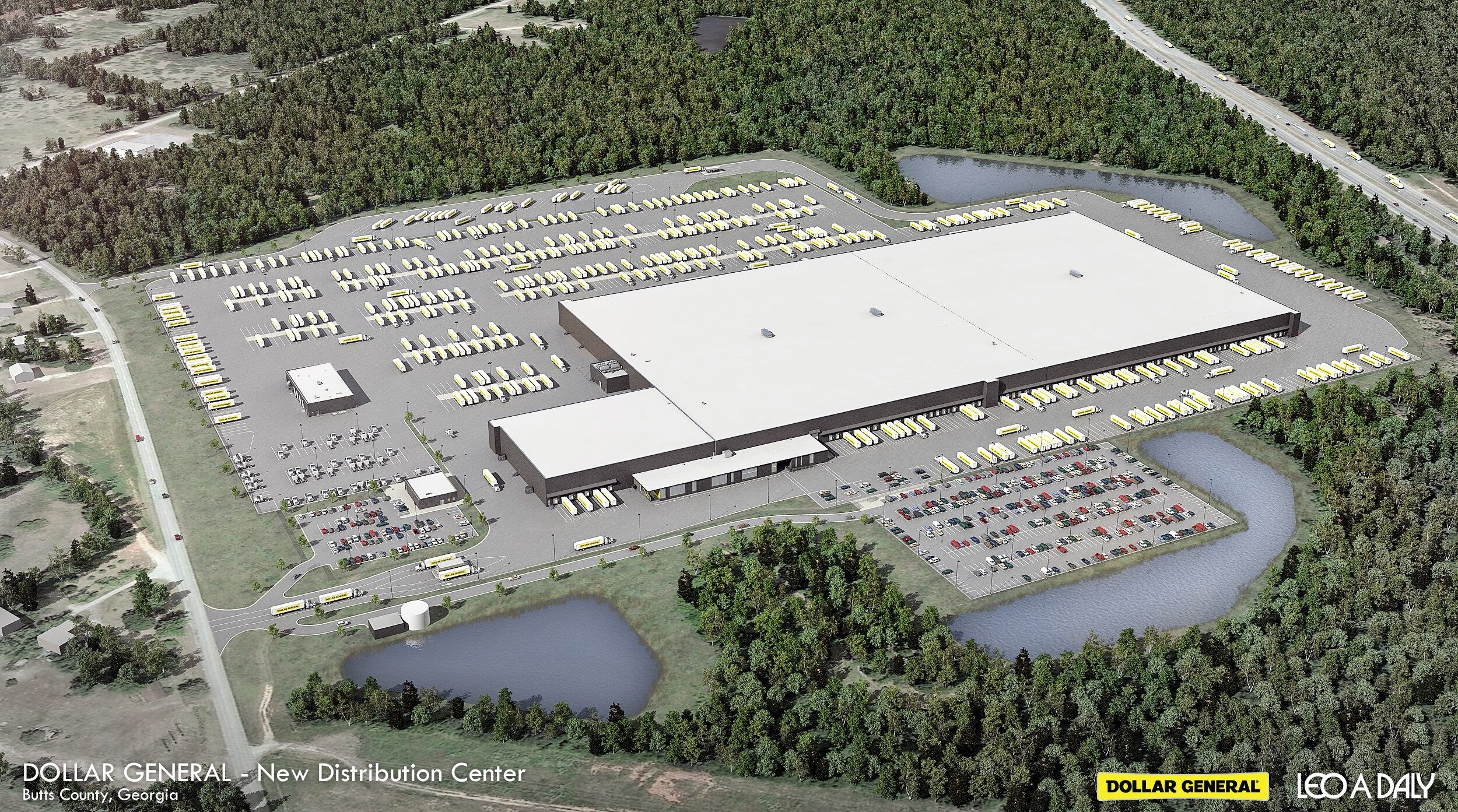 Élan was engaged to provide site design and engineering services for this 150-acre site for the development of a new distribution center for Dollar General in Jackson, GA. Site design included a 1 million sf distribution center, as well as outbuildings including, guardhouses, truck maintenance facility, fire pump house and reservoir, and dispatch facility. Design included site layout for truck circulation, trailer parking, employee parking, and tractor-truck parking. Stormwater management included four large retention ponds to reduce downstream impacts. The site was configured to fit within the natural streams to avoid impact to any streams or existing wetlands that reside on the site. Site design required close coordination with the local sewer and water authority to extend utilities to the site. 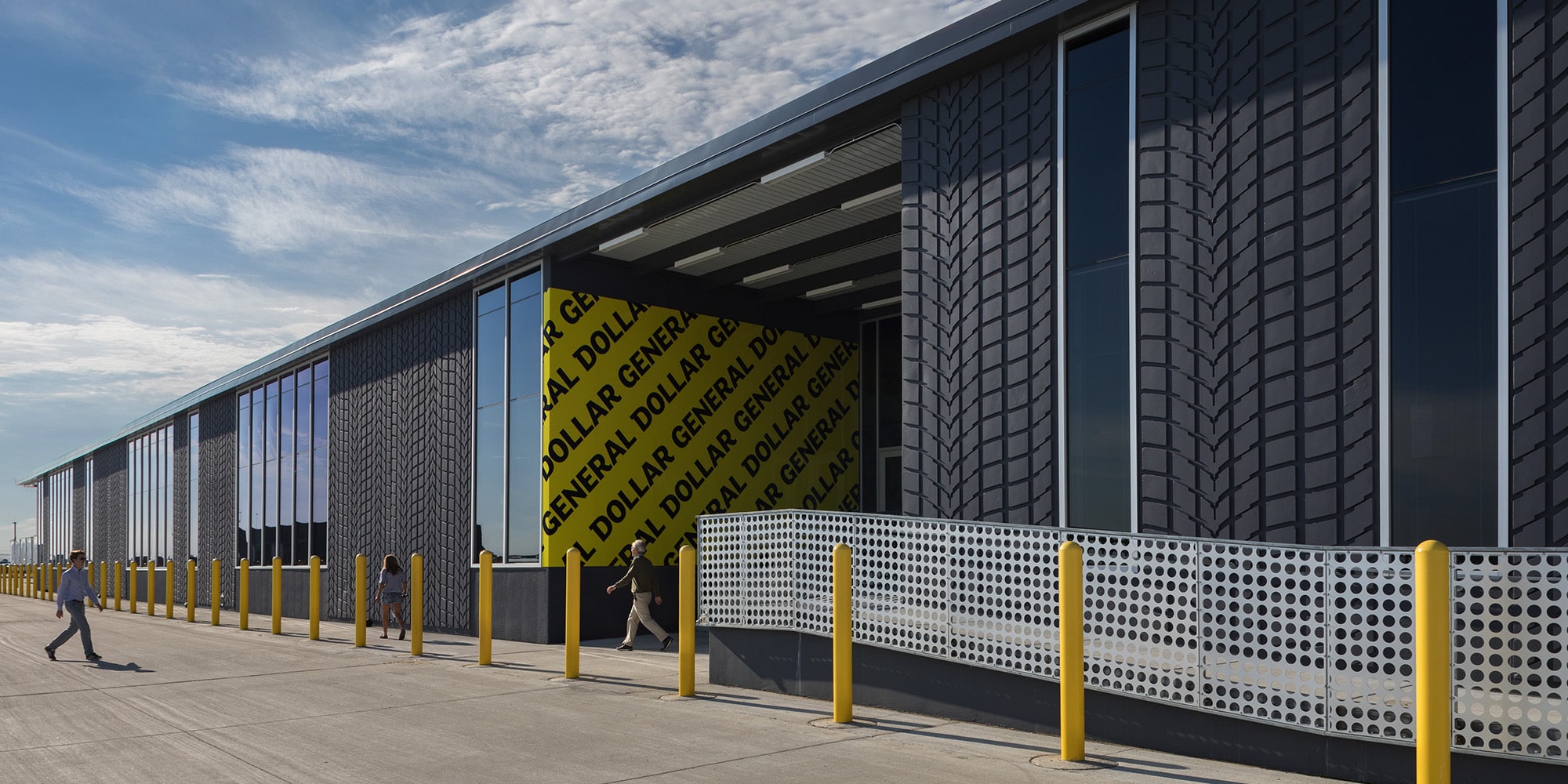 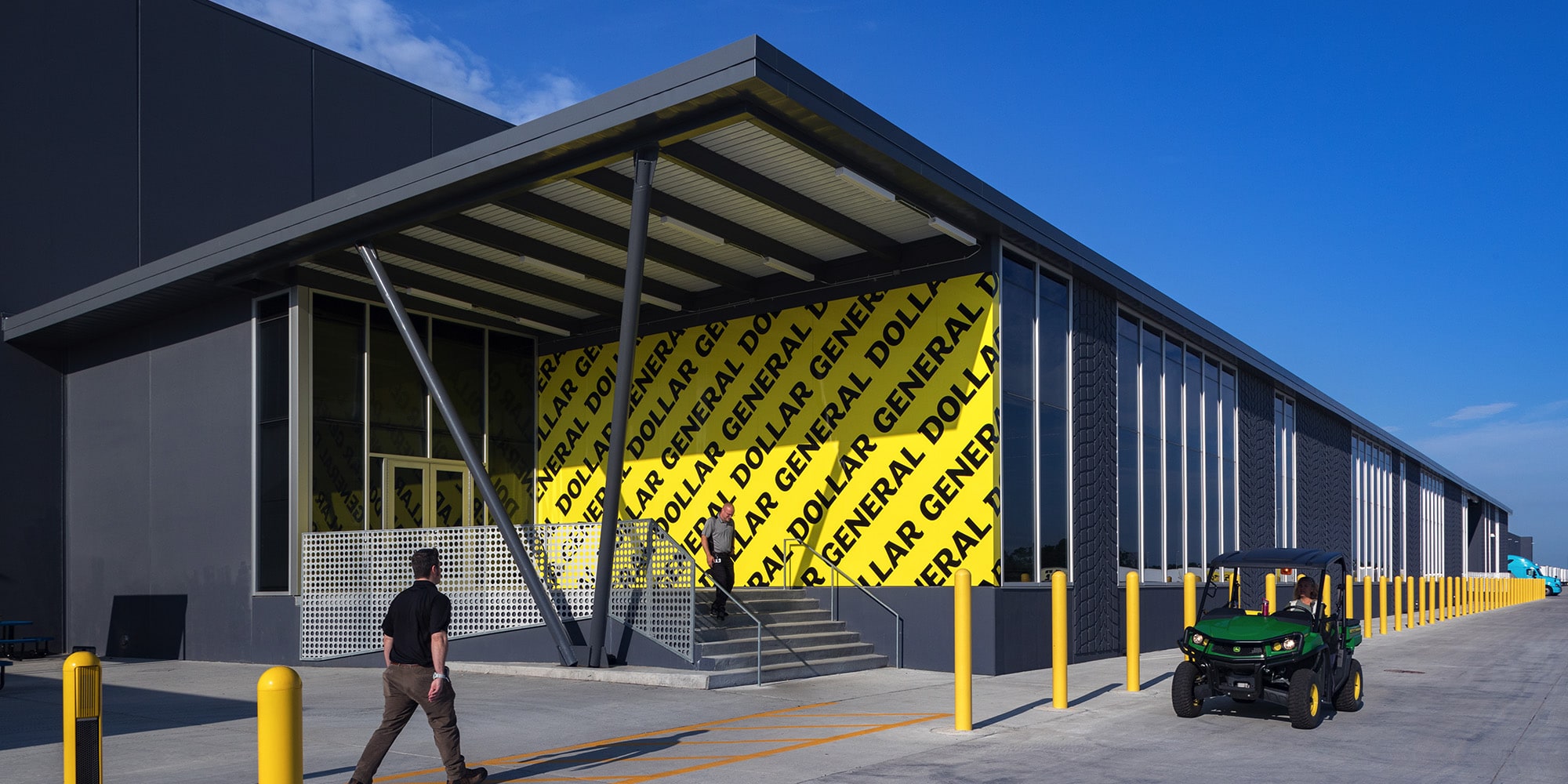 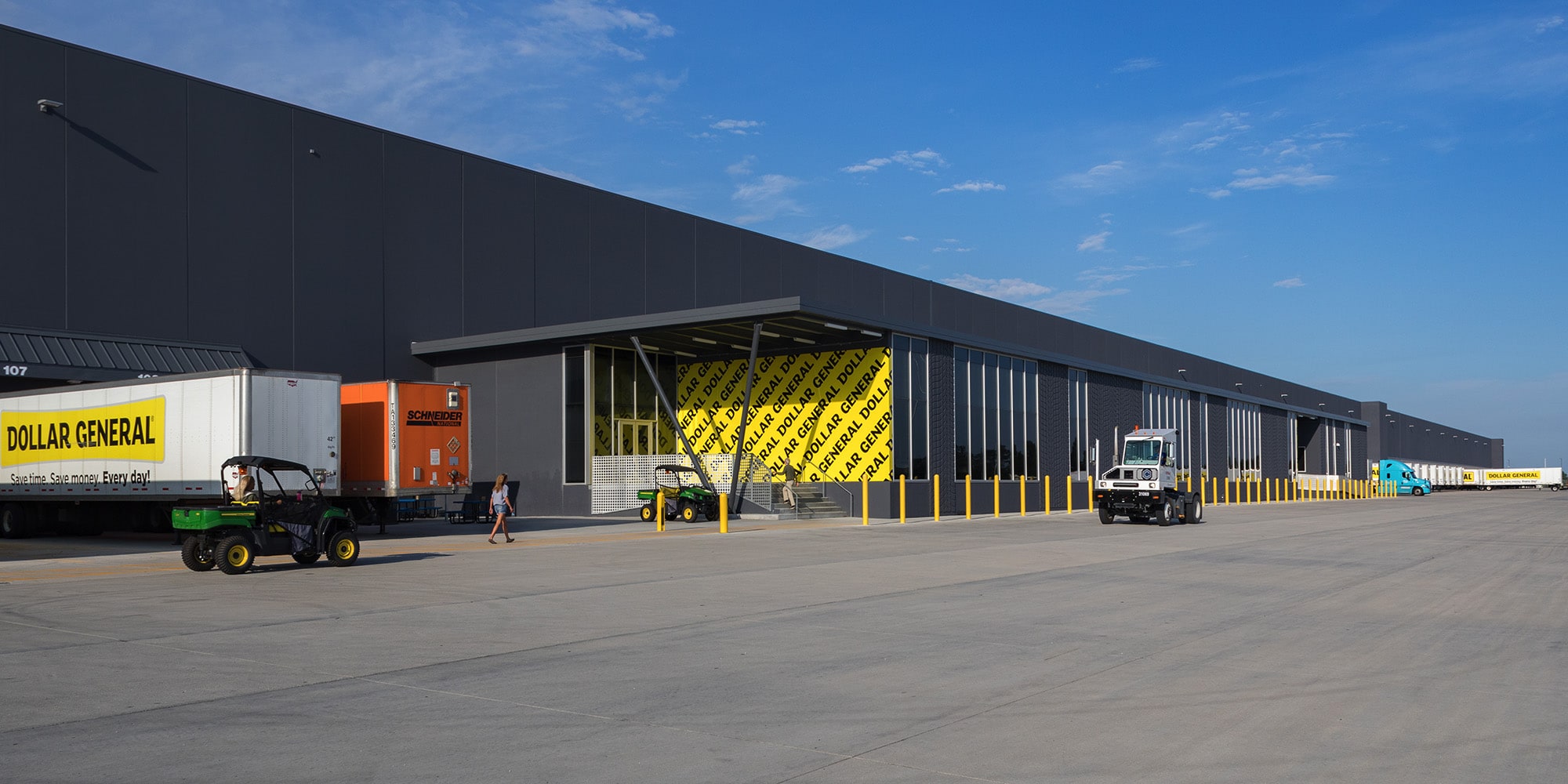 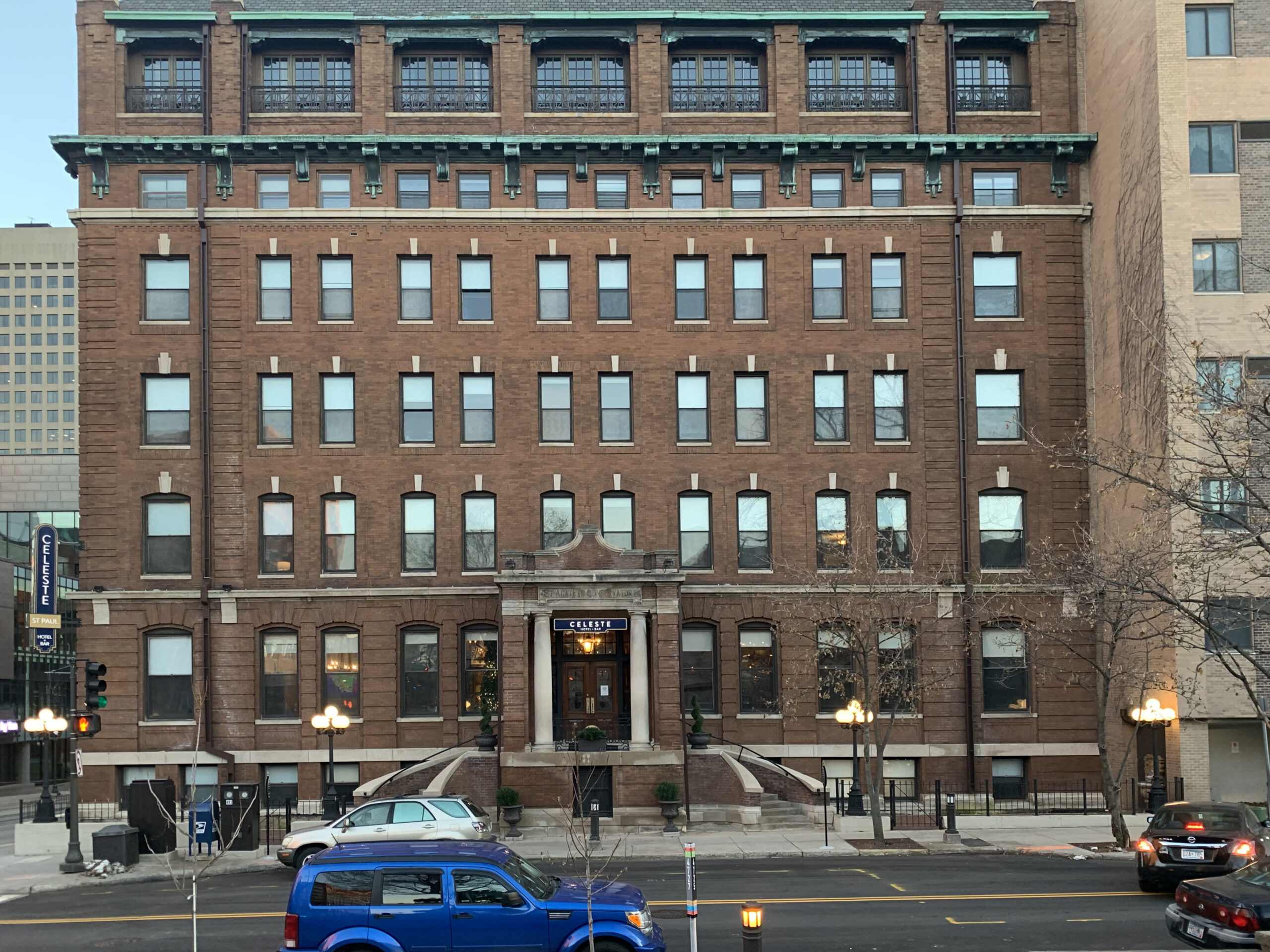 Élan collaborated on the design and renovation of the 26 Exchange building in Saint Paul to convert the use into a boutique hotel. The project included the renovation of the existing building including upgrades at the main entrance and entrance on Cedar Street. This building is listed on the National Historic Register and design elements of the existing building had to be carefully maintained and integrated into the renovation. The main entrance on Exchange Street was rebuilt due to safety issues, which included the retaining wall at the curved stairs to move the structure out of the public right of way. The entrance on Cedar Street was rebuilt with a vestibule and grades redesigned to meet ADA accessibility requirements. The existing grades exceeded ADA allowable slopes and Élan worked closely with the city to revise a portion of the public sidewalk to ensure a safe travel route and entrance to the renovated hotel. 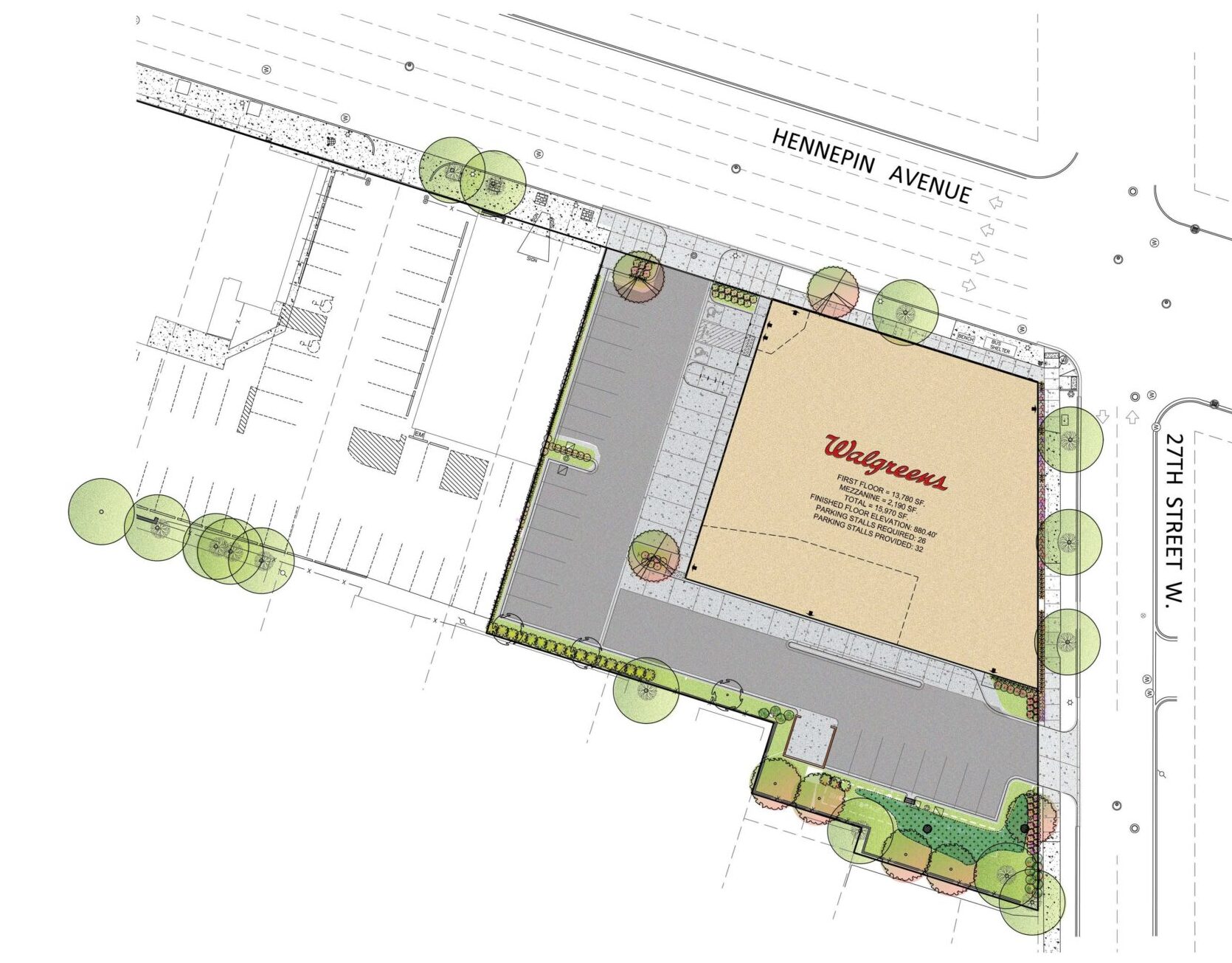 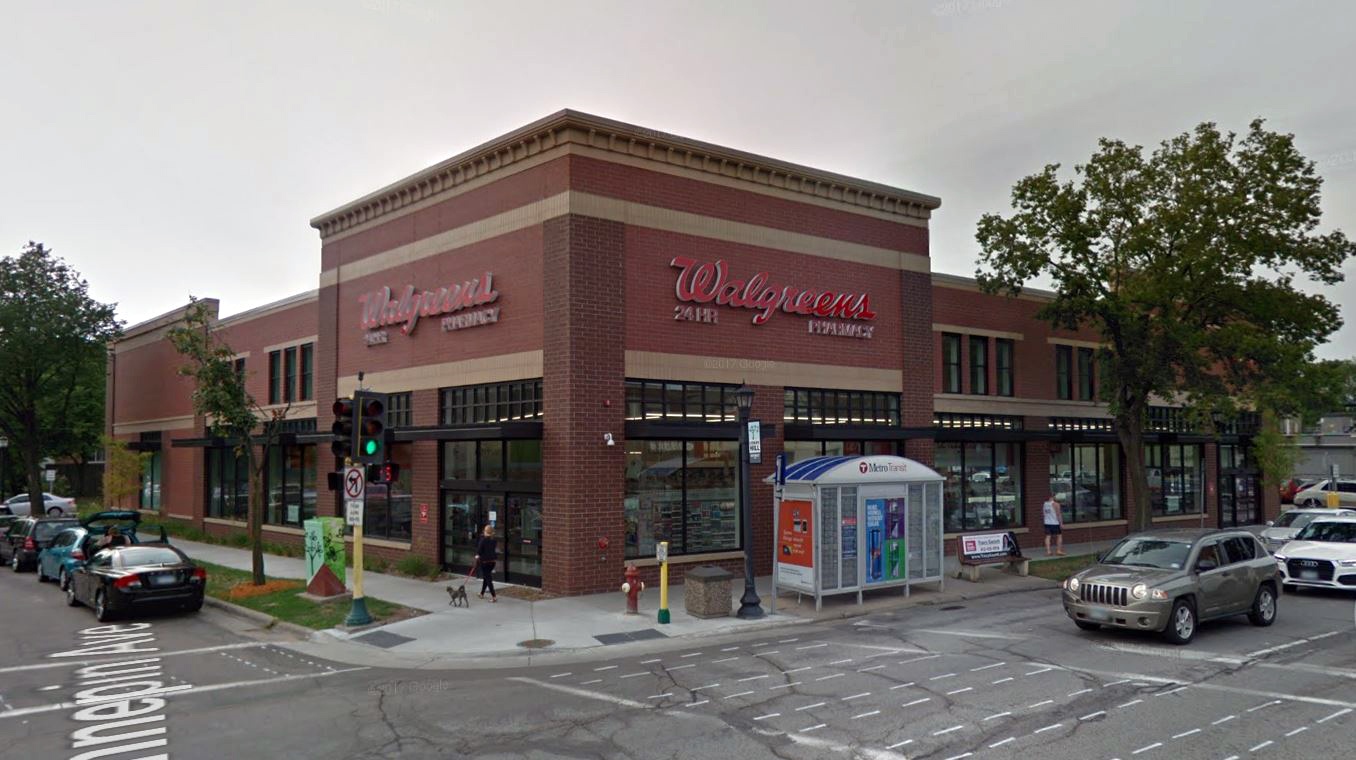 Élan provided civil engineering and landscape architecture services for a new Walgreen’s store with drive-thru pharmacy on a previously developed site. Site design included removal of an existing development for configuration of a new building with surface parking lot and drive-thru on a limited site to accommodate access, landscape, screening, and proper traffic circulation. Élan assisted the design team and developer through the City entitlement process, including permitting through the watershed. Stormwater management was triggered as the site was part of the Shoreland District. Stormwater was treated with a small infiltration basin improving downstream conditions.

Walgreen’s has an intense approach to accessibility and requires that the designer of record certify the accessible routes from the ADA parking stalls to the store front. In addition, this project required working with the City of Minneapolis to incorporate new pedestrian ramps at the Hennepin Avenue and 27th Street intersection complete with Accessible Pedestrian Signals (APS). 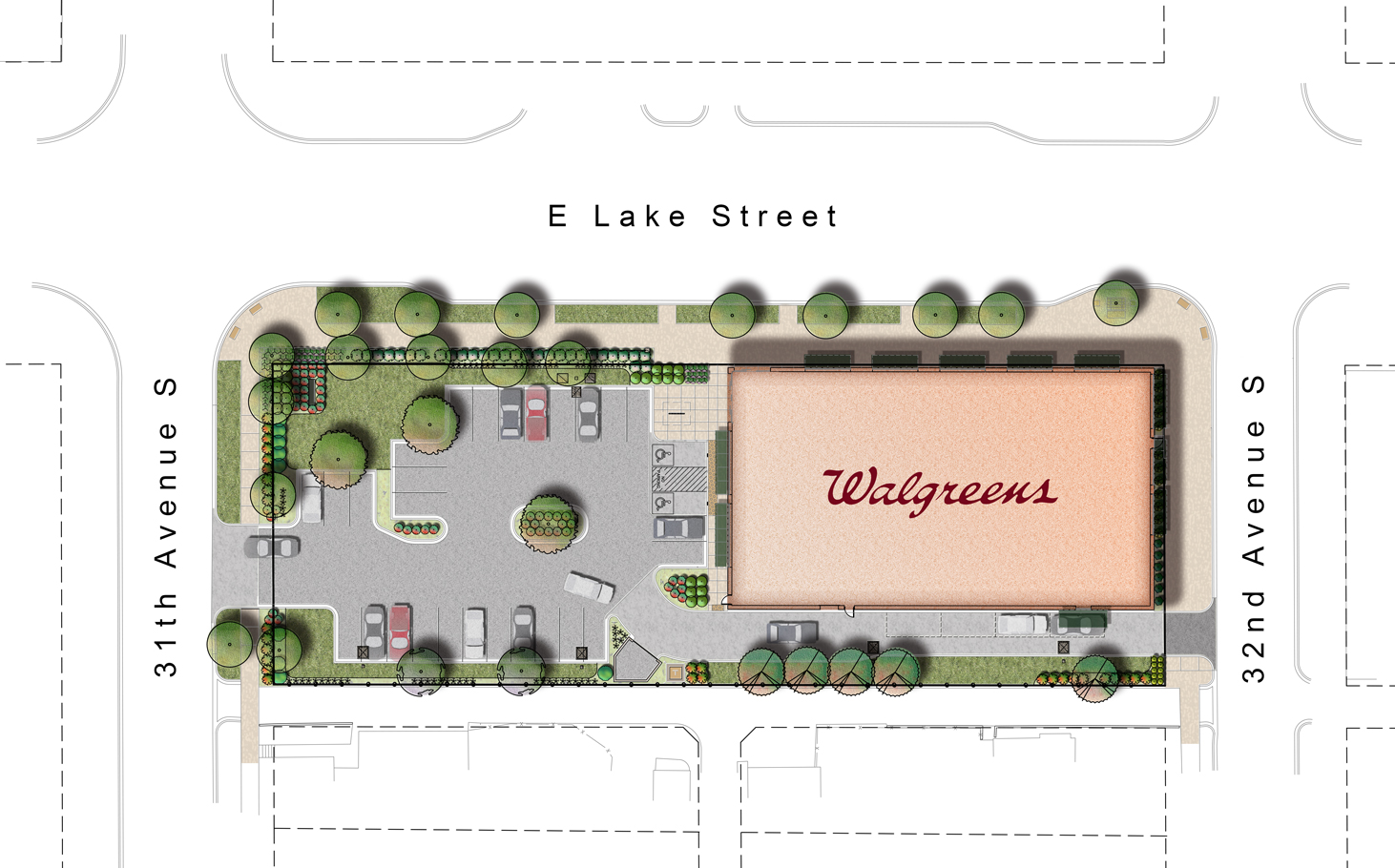 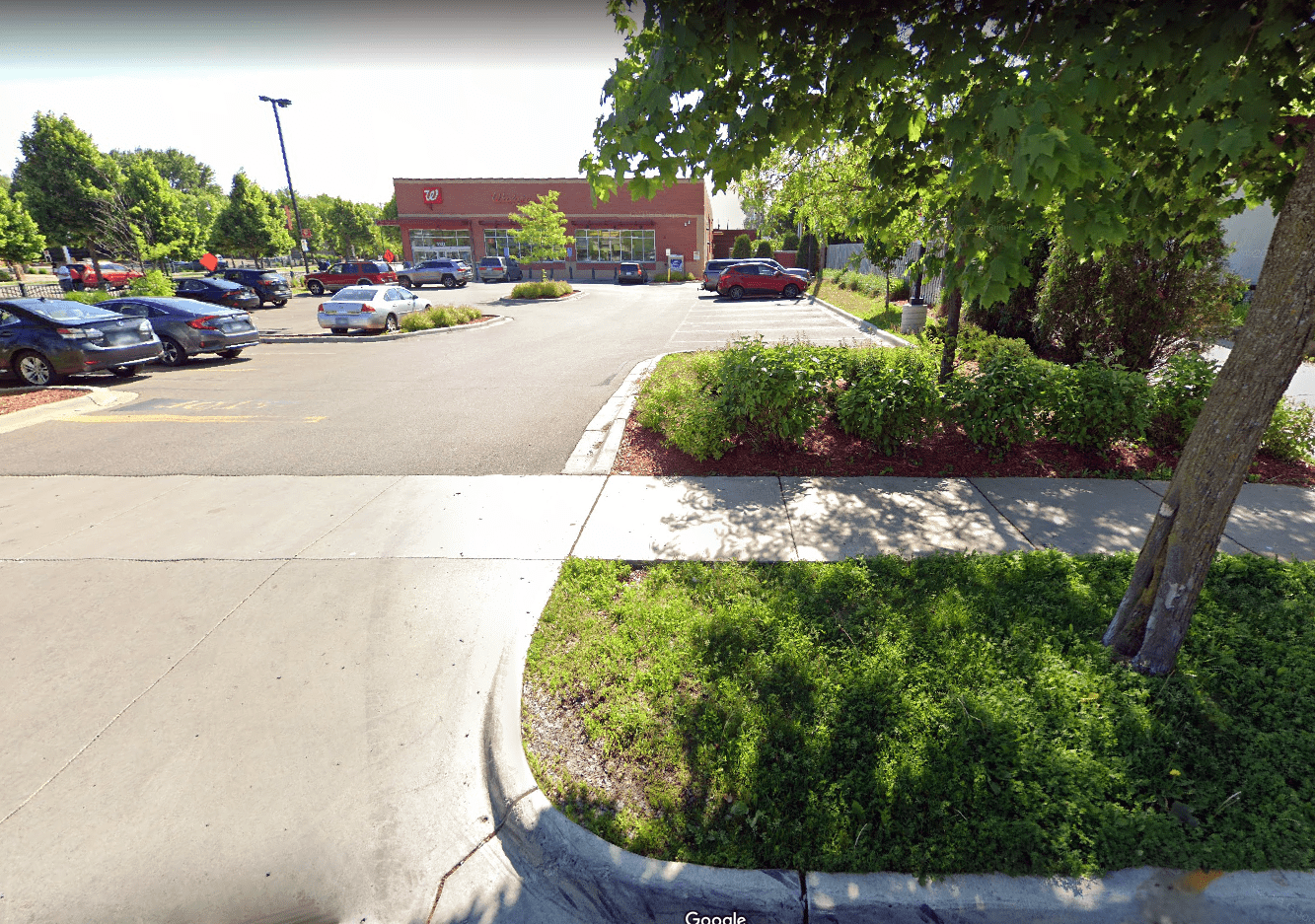 Élan provided civil engineering and landscape architecture services for a new Walgreen’s store with drive-thru pharmacy on a previously developed site. Site design included removal of an existing development for configuration of a new building with surface parking lot and drive-thru on a limited site. Site design required incorporating the varying requirements of the Owner and the City to accommodate access, landscape, screening, and proper traffic circulation on a compact site. Élan assisted the design team and developer through the City entitlement process. 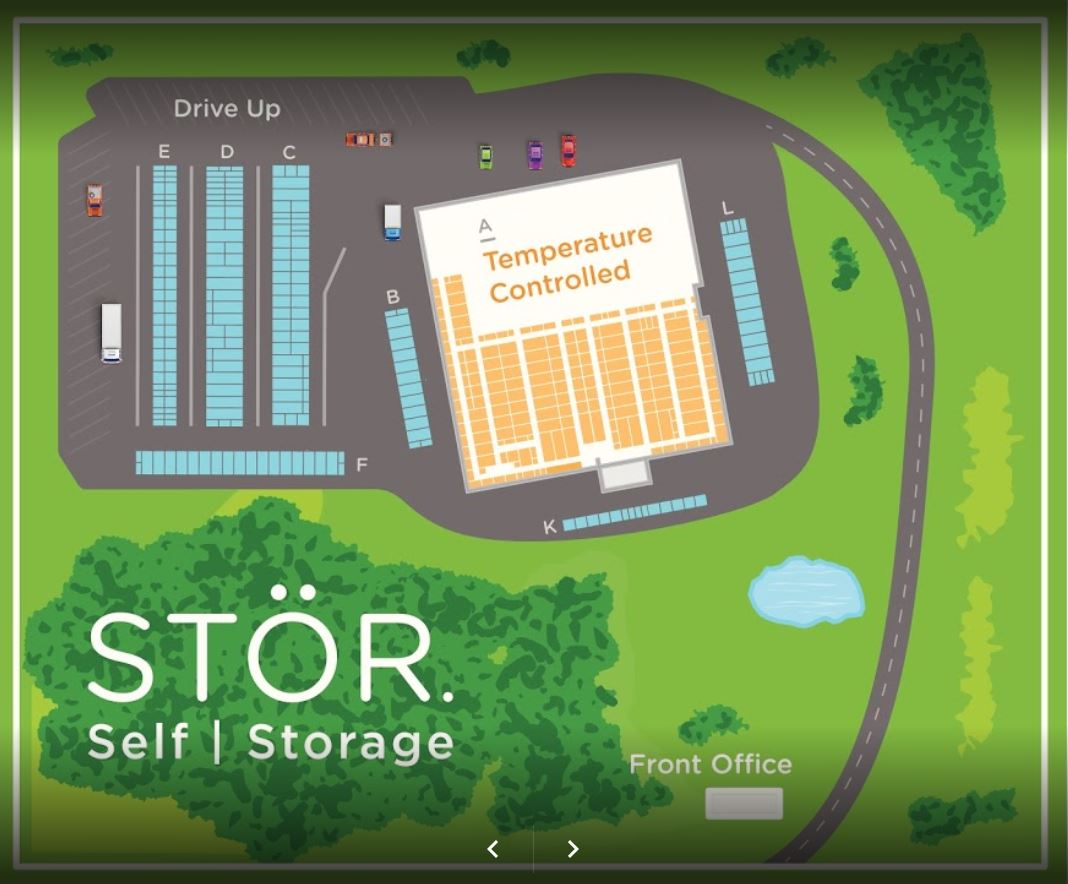 Elan Design Lab provided site design, civil engineering, and landscape architecture service for this 19.3-acre site on the north side of South Robert Trail, west of Jefferson Trail. The existing 55,000 sf shuttered medical device manufacturing facility was converted to climate-controlled storage. Additional buildings are located throughout the site including a 1,600 sf office, 38,000 sf climate controlled building, and 77,000 sf of cold storage buildings. Paved surface are also provided for outdoor vehicle storage. Complicating the design is the 96 feet of relief on the site, soil and groundwater contamination from previous site operations, and proximity to adjacent residences. 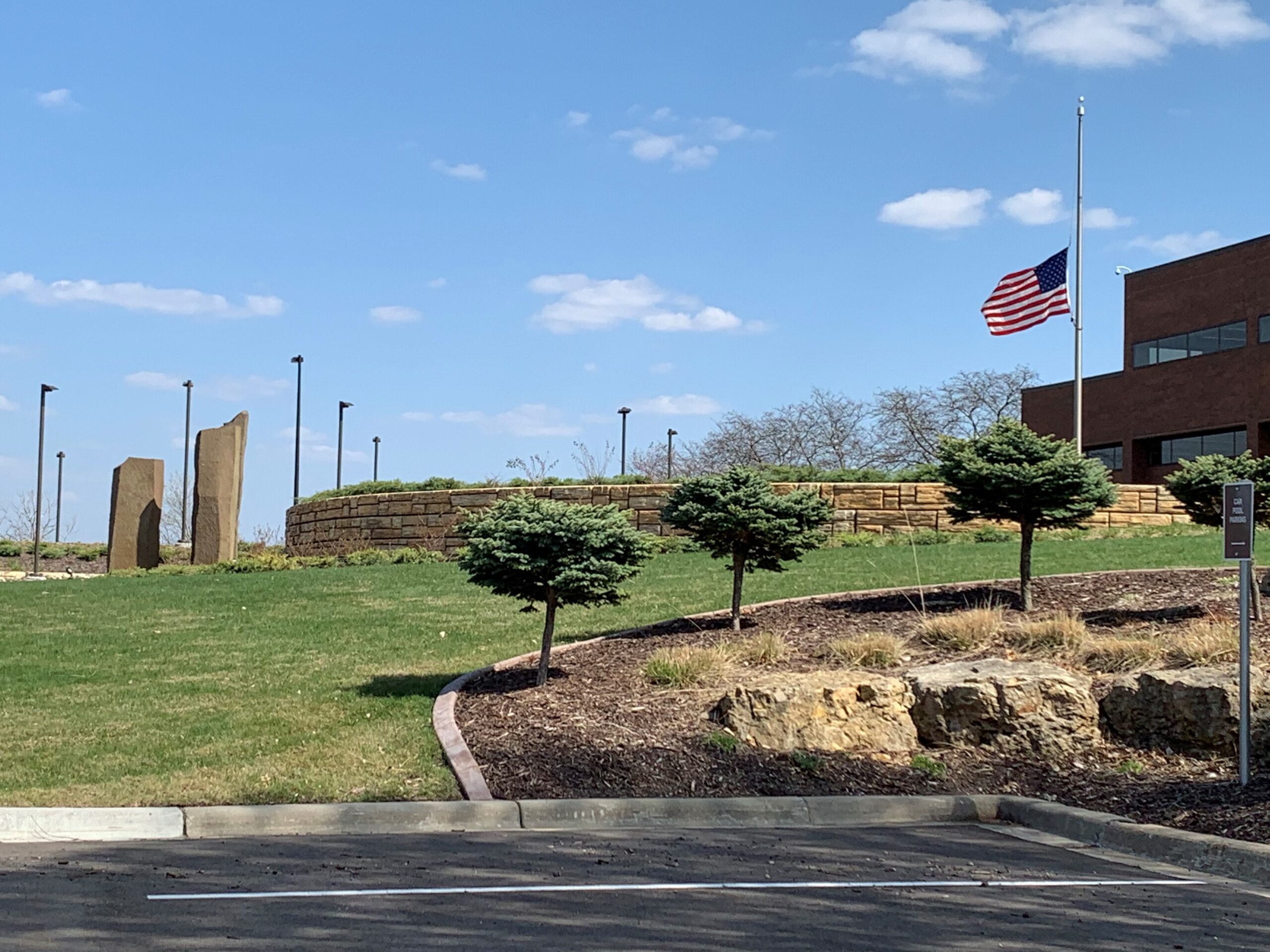 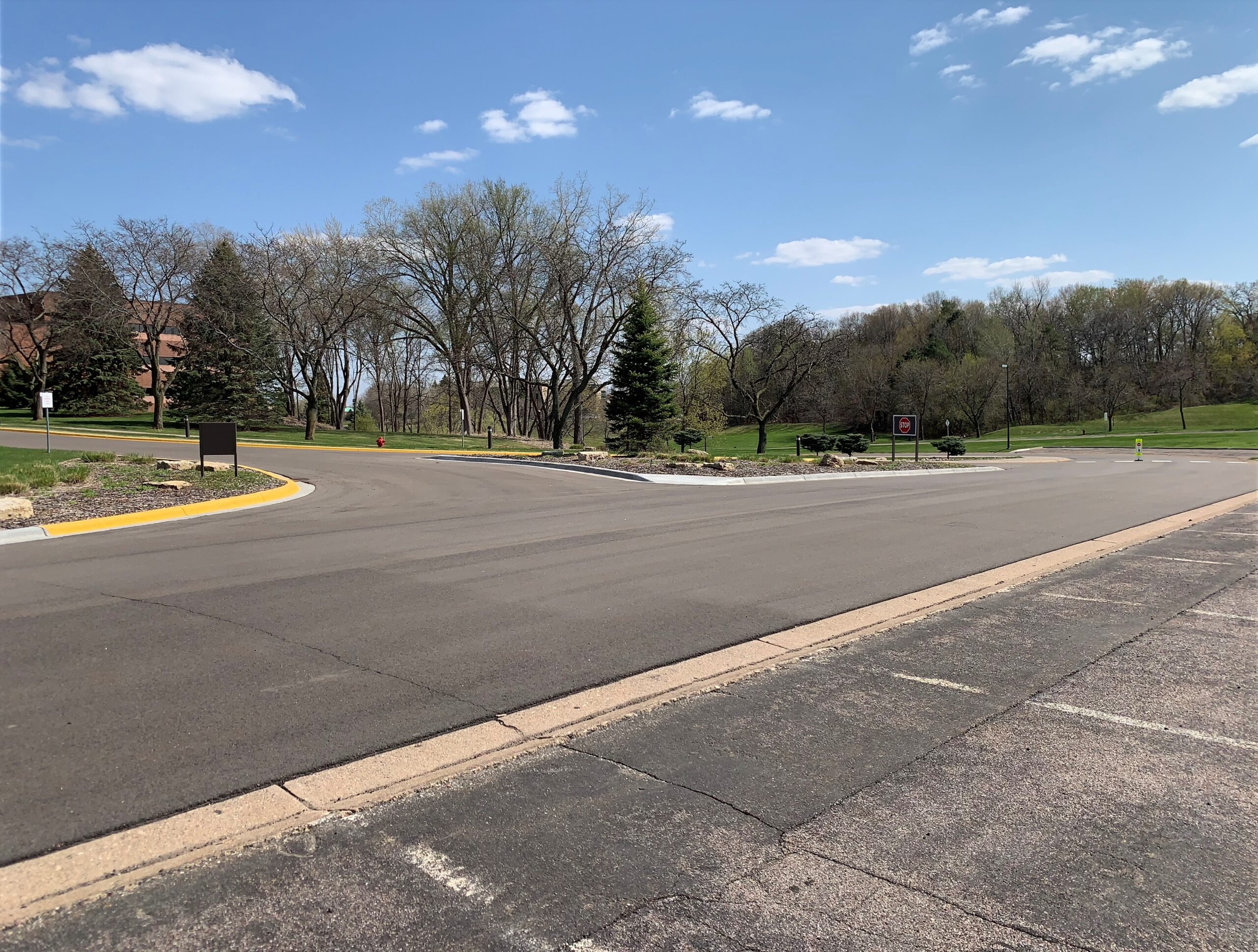 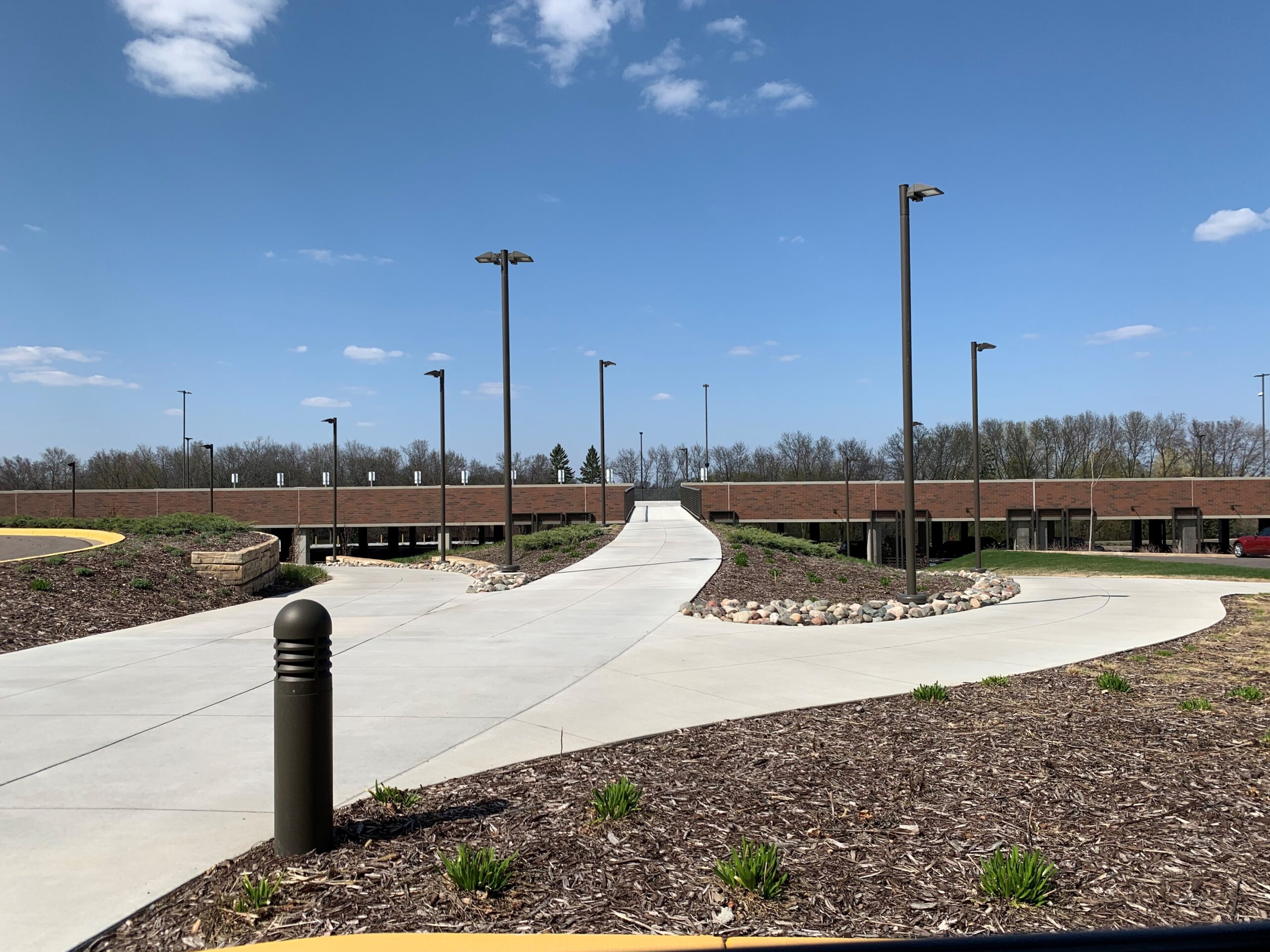 nver Grove Heights. The 37-acre campus is presently occupied by a main multi-story office building on the southern end of the campus, as well as a maintenance building at the north and associated parking and access drive.

The project involved construction of a 360-stall parking ramp that was built on top of existing parking located north of the main building. New walkways for pedestrian and ADA access were constructed to both levels and included a pedestrian bridge. There was significant grade differential from the building to the parking lot and great care was taken with the site layout to ensure proper slopes and access to both levels of the ramp for ADA. Additionally, the existing parking lot and curbs were removed and redesigned to work seamlessly with the new ramp.

Due to the nature of building the parking deck over an existing asphalt parking lot, the drainage areas of the two parking levels must be separated per plumbing code. The upper deck is being collected in the center aisle and routed down the columns to the lower level by pipes. The pipes are collected and are first routed through pretreatment sump manholes before being routed to an underground infiltration system. Additionally, a portion of the existing parking lot, as well as a portion of the existing drive aisle was routed to the underground infiltration facility. 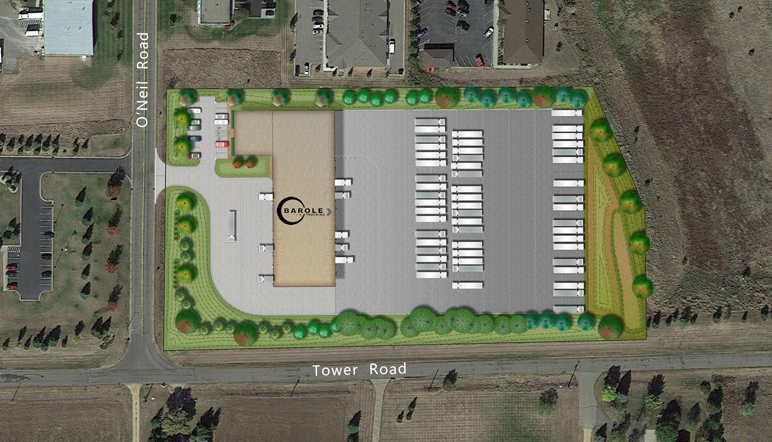 Élan was engaged to provide site design and engineering services for this commercial trucking, warehousing and storage, cross docking and transloading facility in Hudson Wisconsin. The 33,000 sf building includes service and loading bays with drive-in doors as well as four 4-foot loading docks, and approximately 3,000 sf of office area. A large parking/maneuvering area is provided for trucks/trailers/containers. A parking area in front of the office area provides space for 19 designated employee and visitor vehicles. The stormwater management system provides for infiltration of approximately 70% of the annual rainfall and over 90% removal of total suspended solids. 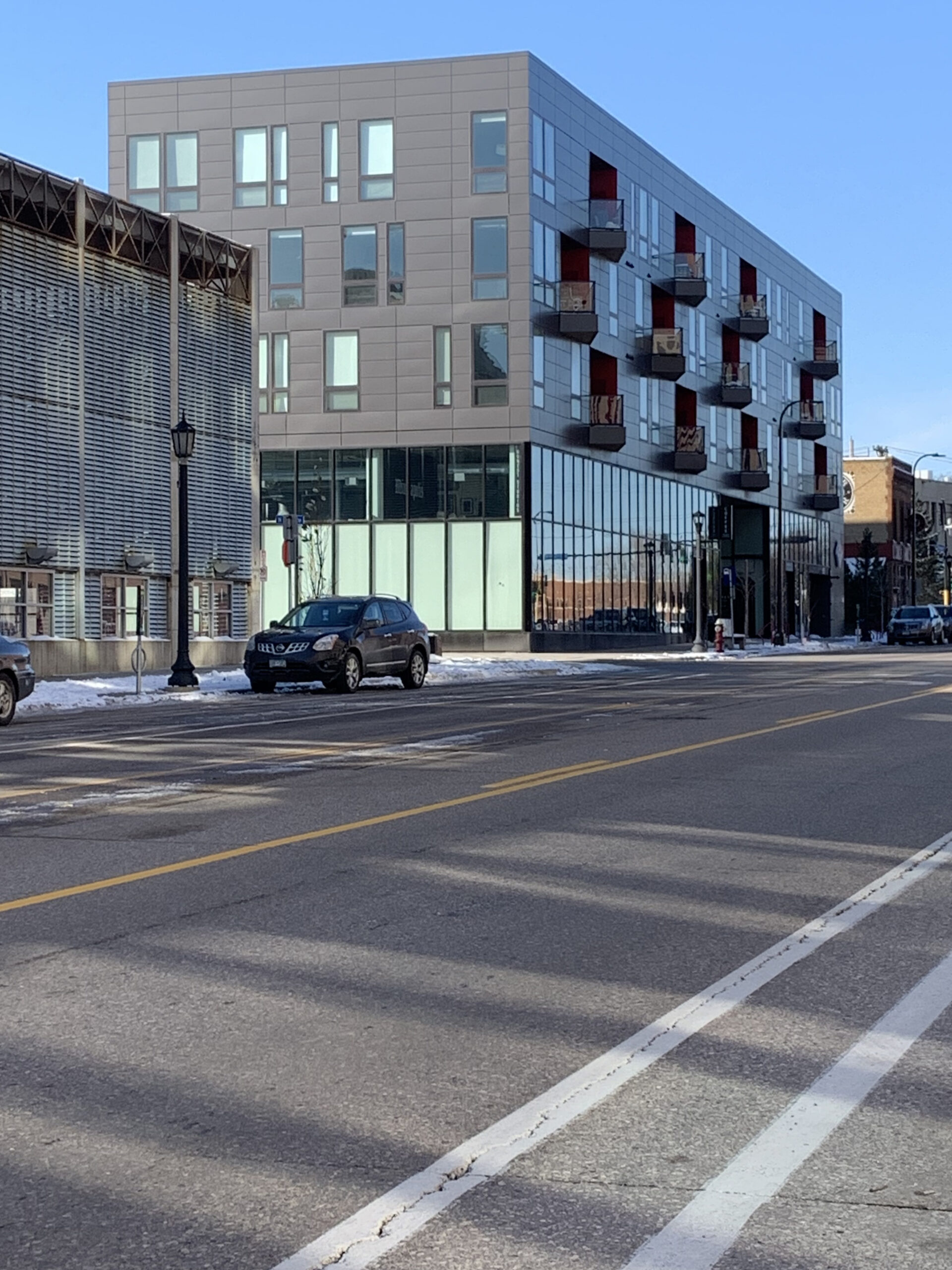 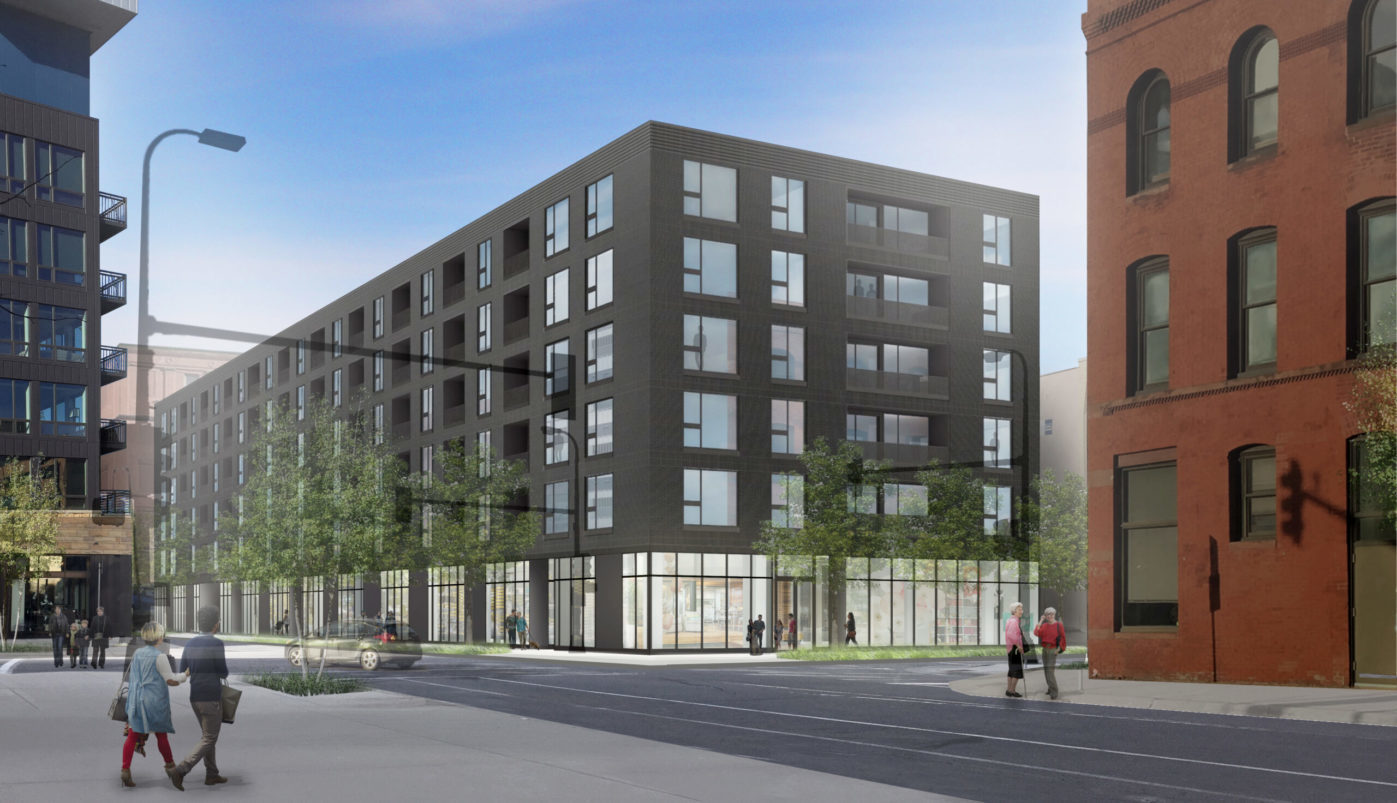 Second + Second is 6-stories tall and includes first floor retail and five stories of residential apartments with two floors of underground parking. The 0.99 acre project site extends for a full city block and required significant coordination with the City relating to the reconstruction of the sidewalks and alley, along with an intersection curb extension at N 2nd Street and N 2nd Avenue.

Élan worked closely with the project architect and landscape architect to integrate a central four-season plaza that provides ground level connectivity to the retail spaces, streets, alley and adjacent properties. The site was formerly occupied by a service station with leaking fuel tanks, requiring additional coordination with the environmental engineers and contractor for remediation of the contaminated soil. 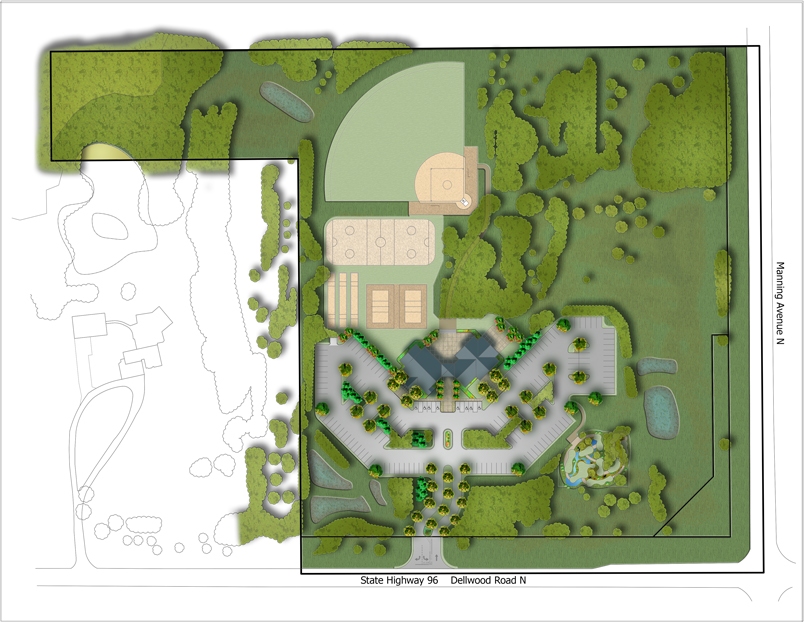 Élan was engaged to develop the site plan for this unique entertainment venue near Stillwater, Minnesota. The owner envisioned an active sports themed bar/restaurant where their patrons could enjoy onsite competitive athletic activities. Facilities incorporated into the site include volleyball, softball, bocce ball, mini golf and broomball. The grading and drainage plans maintain the existing rate and volume of runoff at each of the four locations where stormwater runoff leaves the site, including the dual use of the broomball rink as an infiltration facility. Élan developed a landscape plan that incorporates the existing mature spruce and pine trees along with a mixture of new trees, shrubs, perennials and native grasses to create a site that feels well-established and inviting. 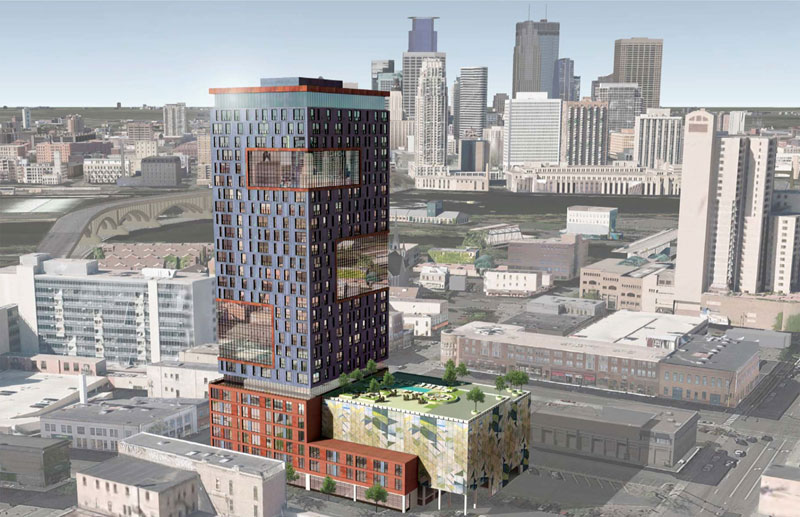 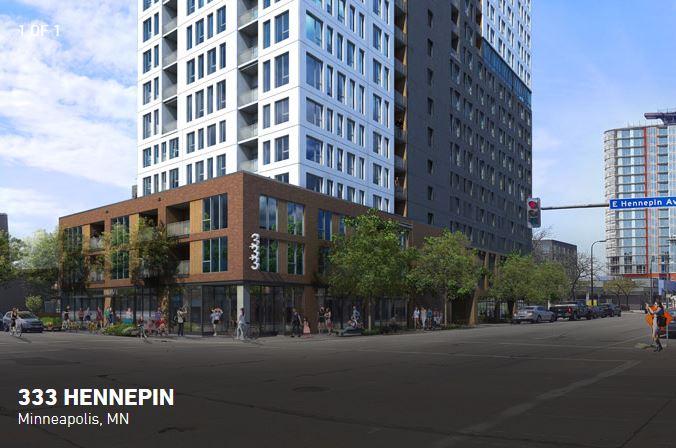 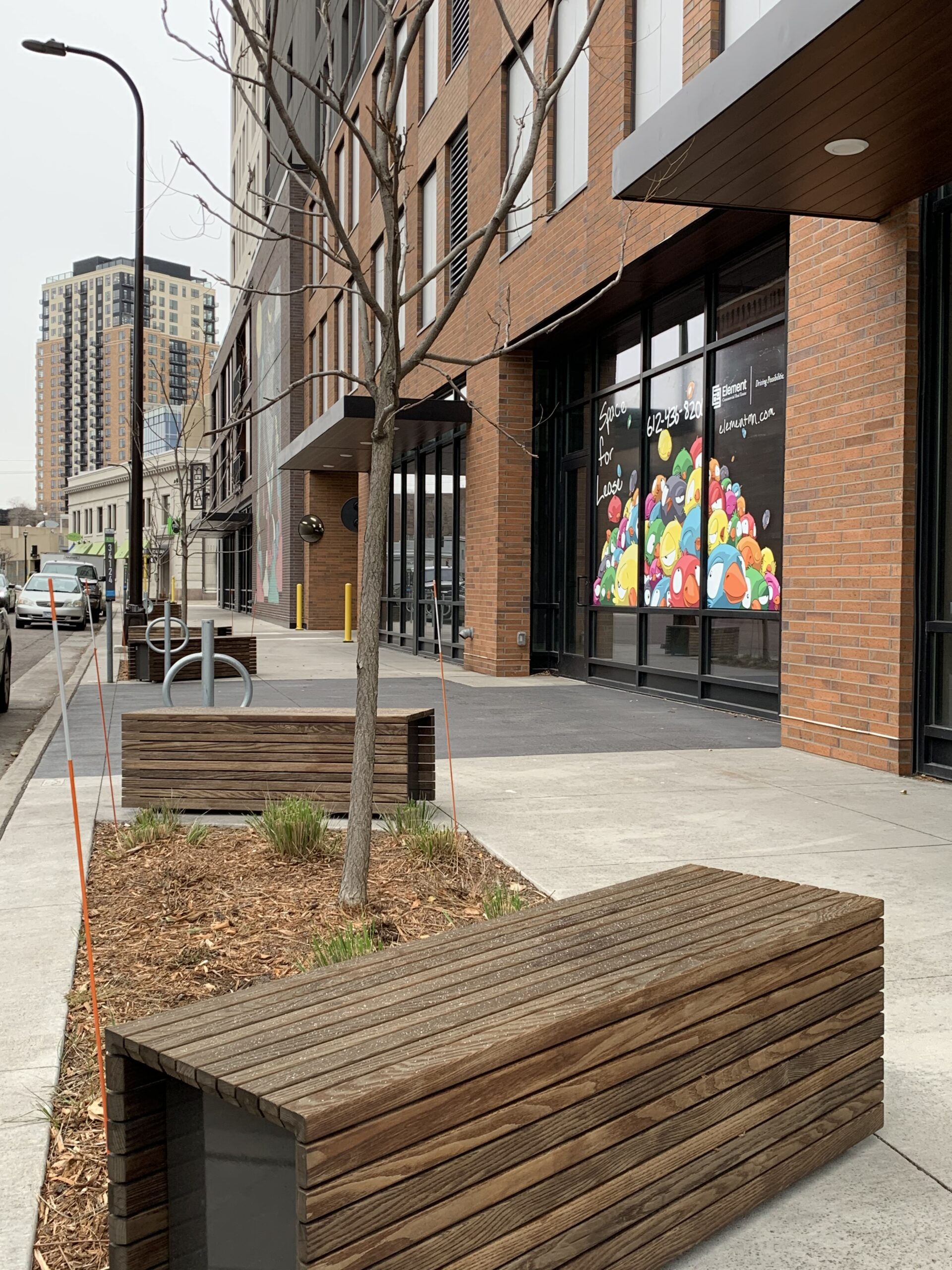 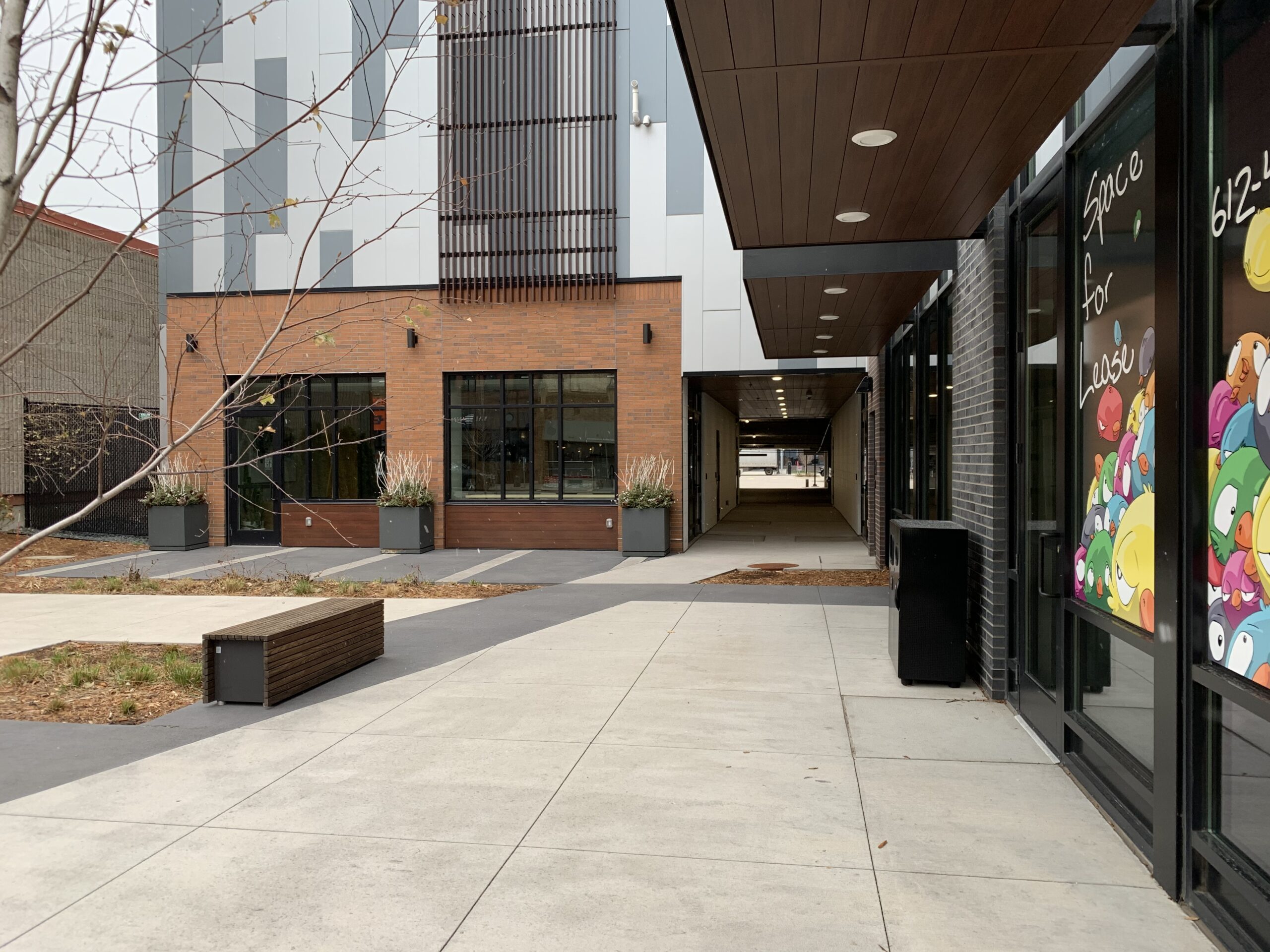 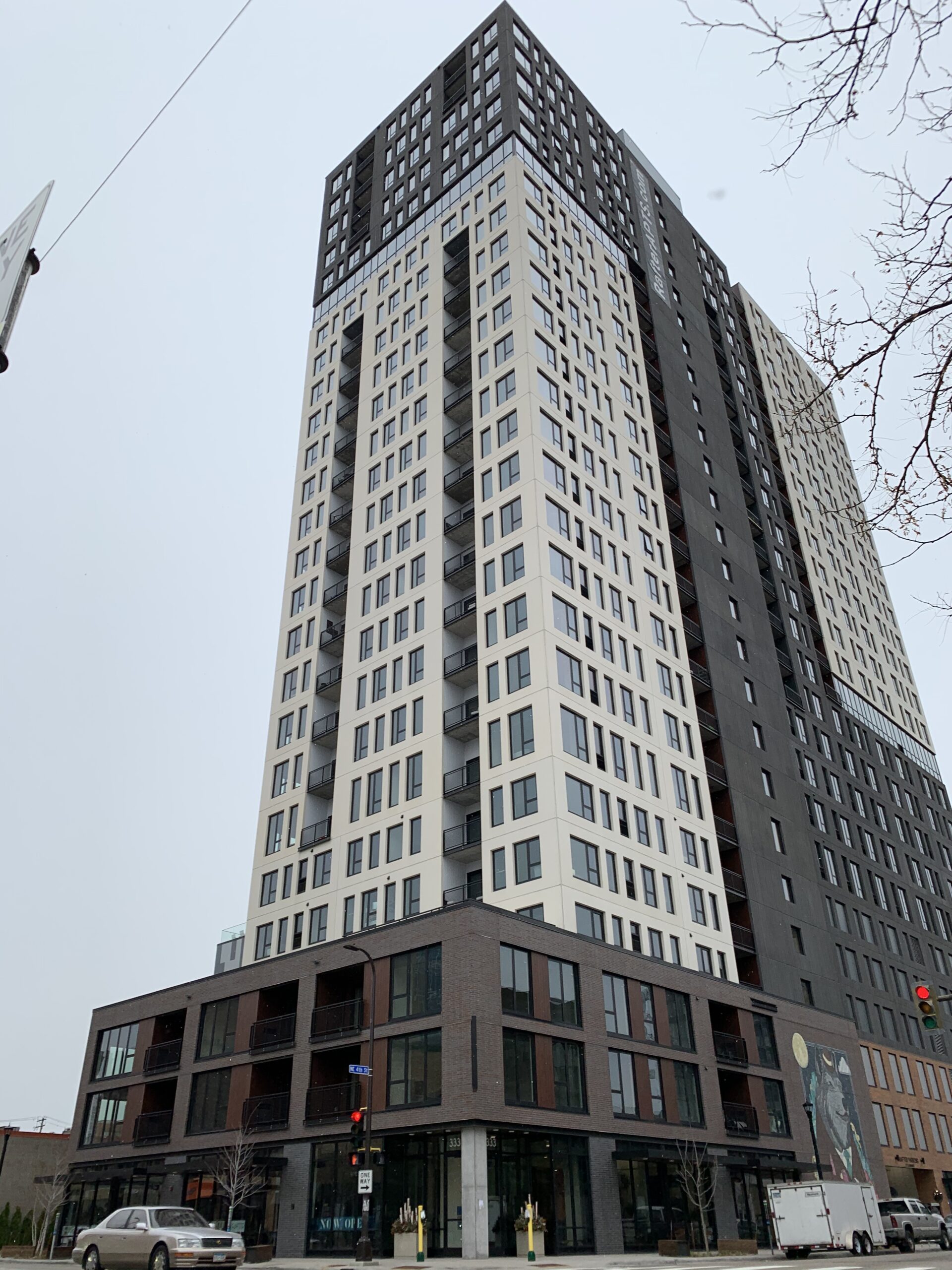 Rafter includes first floor retail, surface plaza, 282 residential units, and a 6-story parking ramp in a 26-story tower. Élan’s landscape architect worked closely with the project architect to create a vibrant outdoor plaza for the retail spaces while providing a cohesive ground floor plan to meet the building program at this 32,000 sf urban site. The design of the outdoor space also included site amenities at the street side including street trees, planters, and seating areas complete with charging stations.

The primary engineering challenge included incorporating storm water management for this second phase of the redevelopment. Due to significant environmental contamination along with shallow bedrock the stormwater approach utilizes a filtration system located on the first floor of the covered parking area to meet the City requirements for reduction in total phosphorus and total suspended solids. 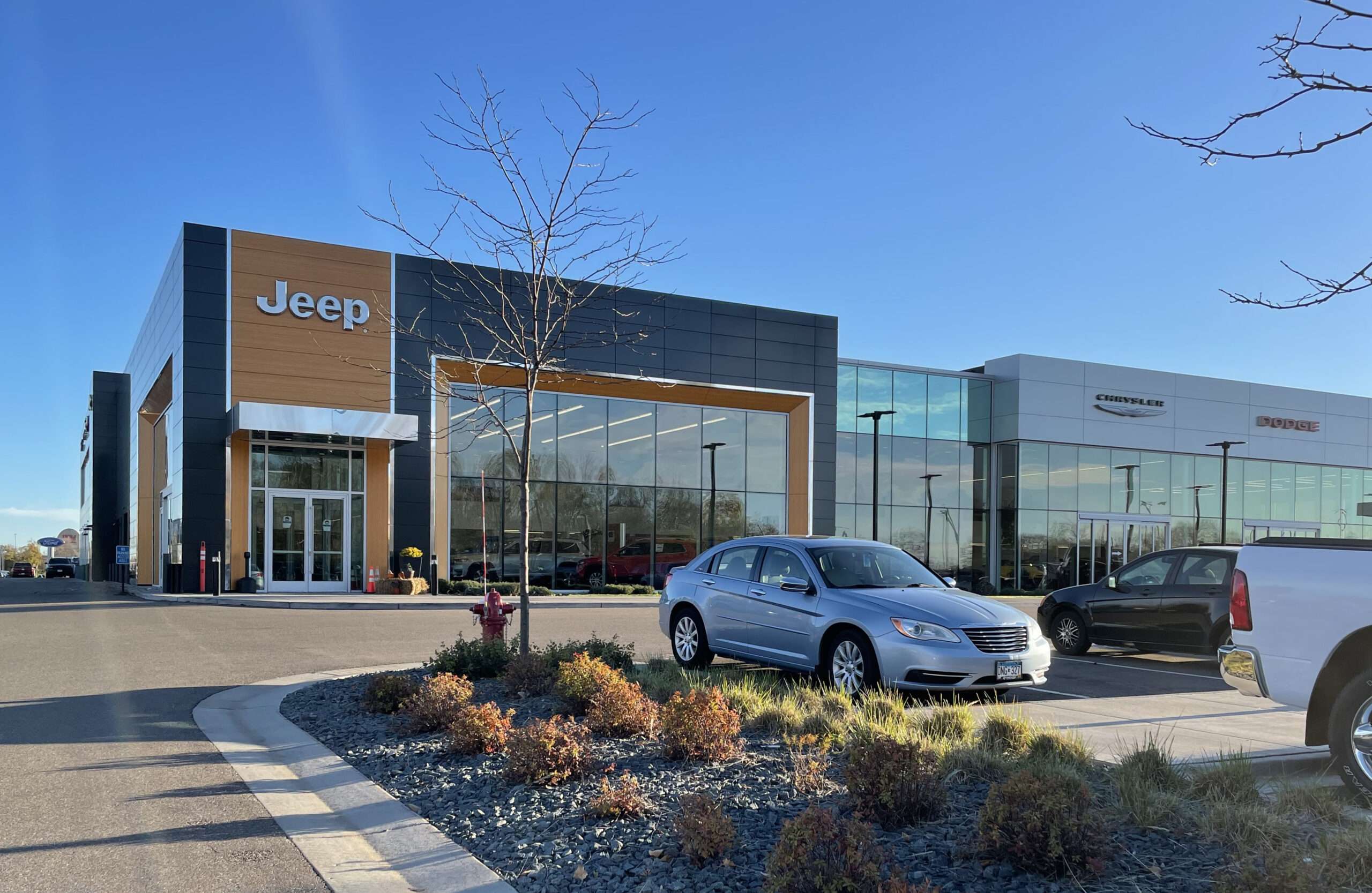 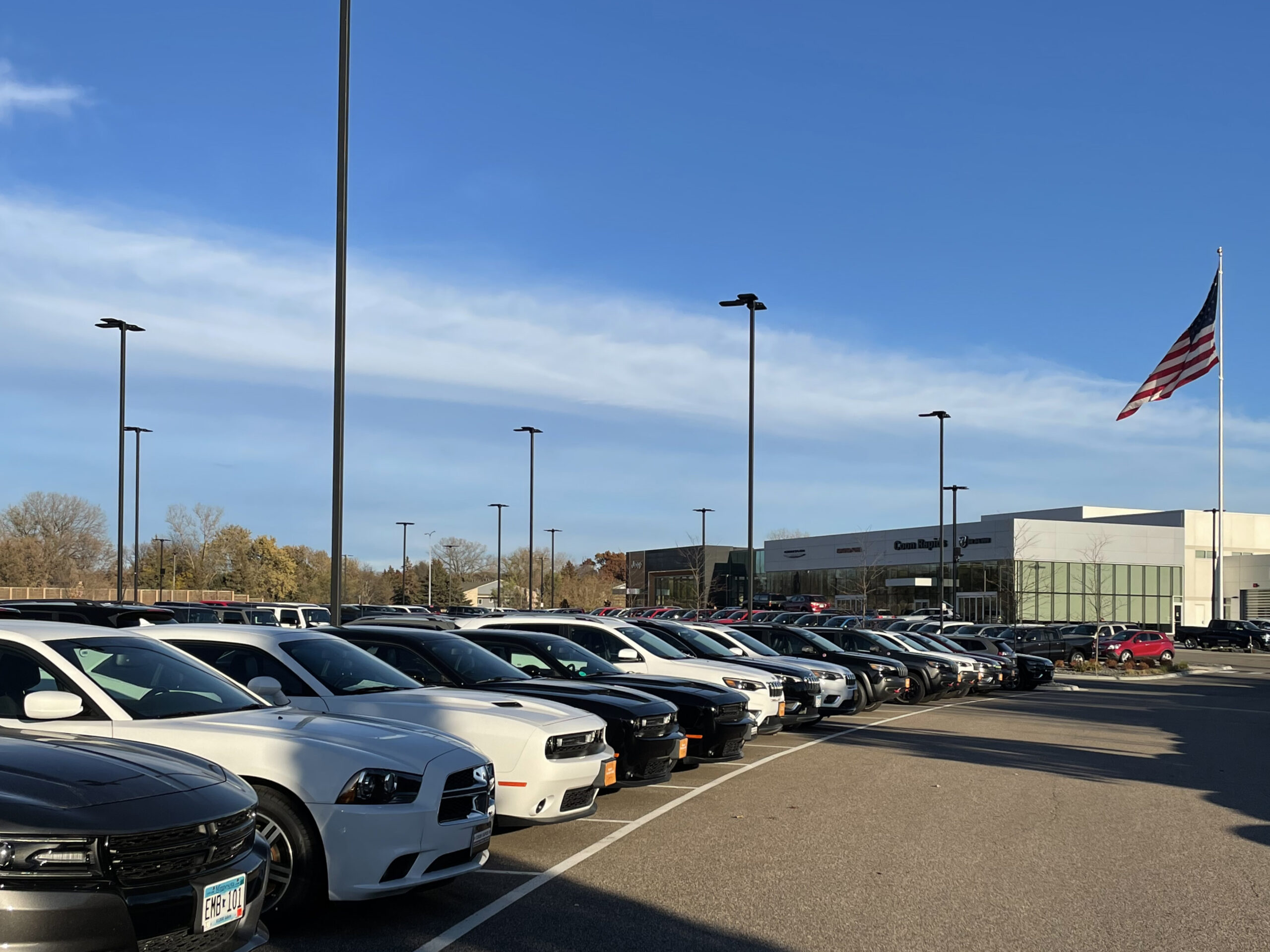 This project was a renovation and expansion adding 300 new parking stalls in a newly acquired parcel to the west of the existing dealership. The project increased their lot from 600 to 900 stalls. The new design included incorporation of stormwater management to meet the local watershed’s requirements and site design to accommodate additional parking stalls that work with the existing vehicle circulation without impact to the adjacent wetlands. In addition, the landscape design required incorporation of the City ordinance while maintaining proper circulation of the lot to maximize parking. The main design concern was integrating the requirements of the watershed district without disturbance of the wetland. To meet the volume control requirements, the lot had to be raised to get the proper infiltration basin depth above the groundwater level. Steve Johnston worked with the watershed district to come up with a solution of utilizing the wetland buffer to provide the area for pretreatment of the stormwater before it entered the stormwater BMP and ultimately the wetland. Due to raising the grade, the site had to be designed to sheet flow to the infiltration basin as there wasn’t enough depth to accommodate traditional conveyance in pipes. 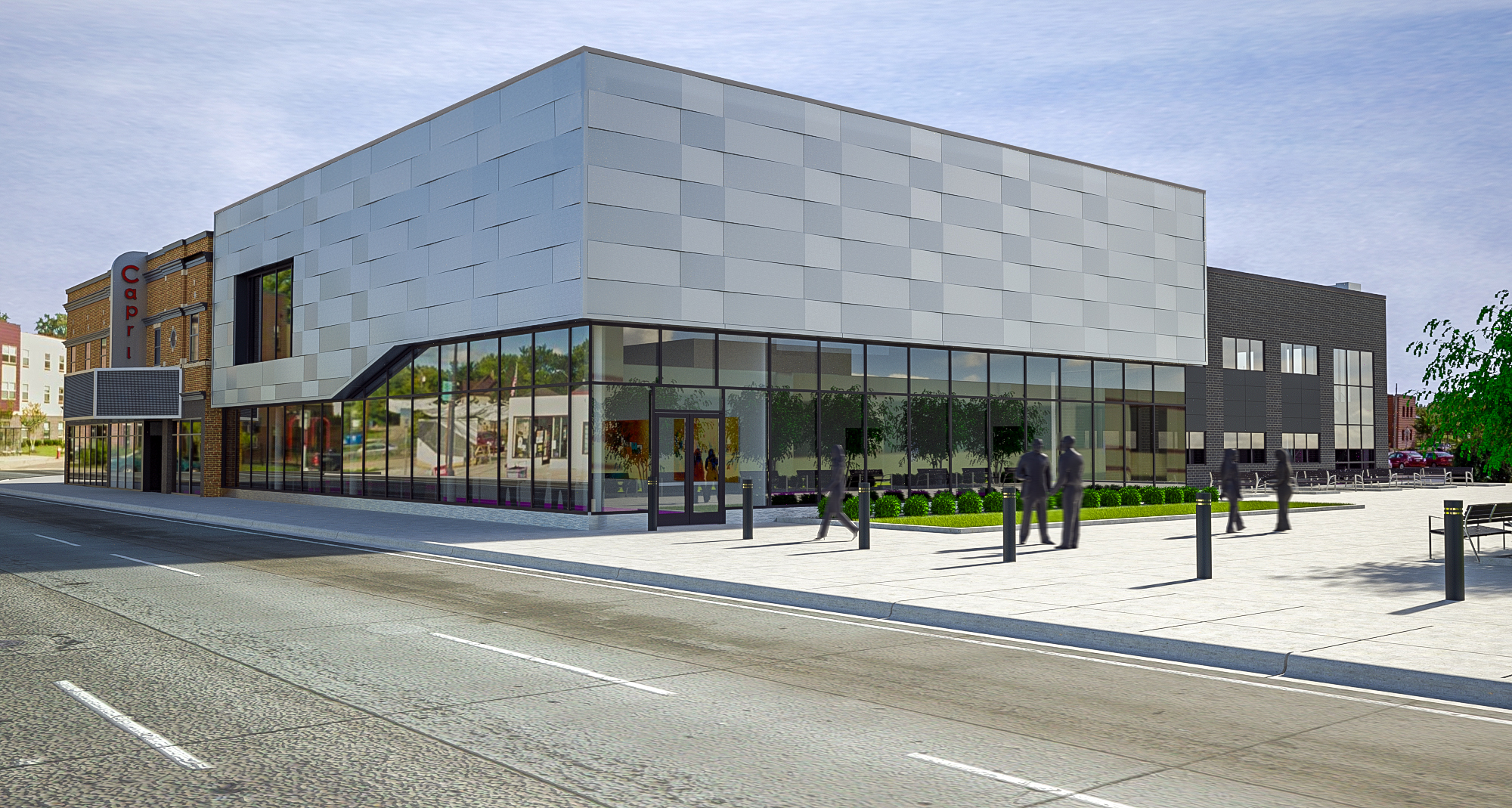 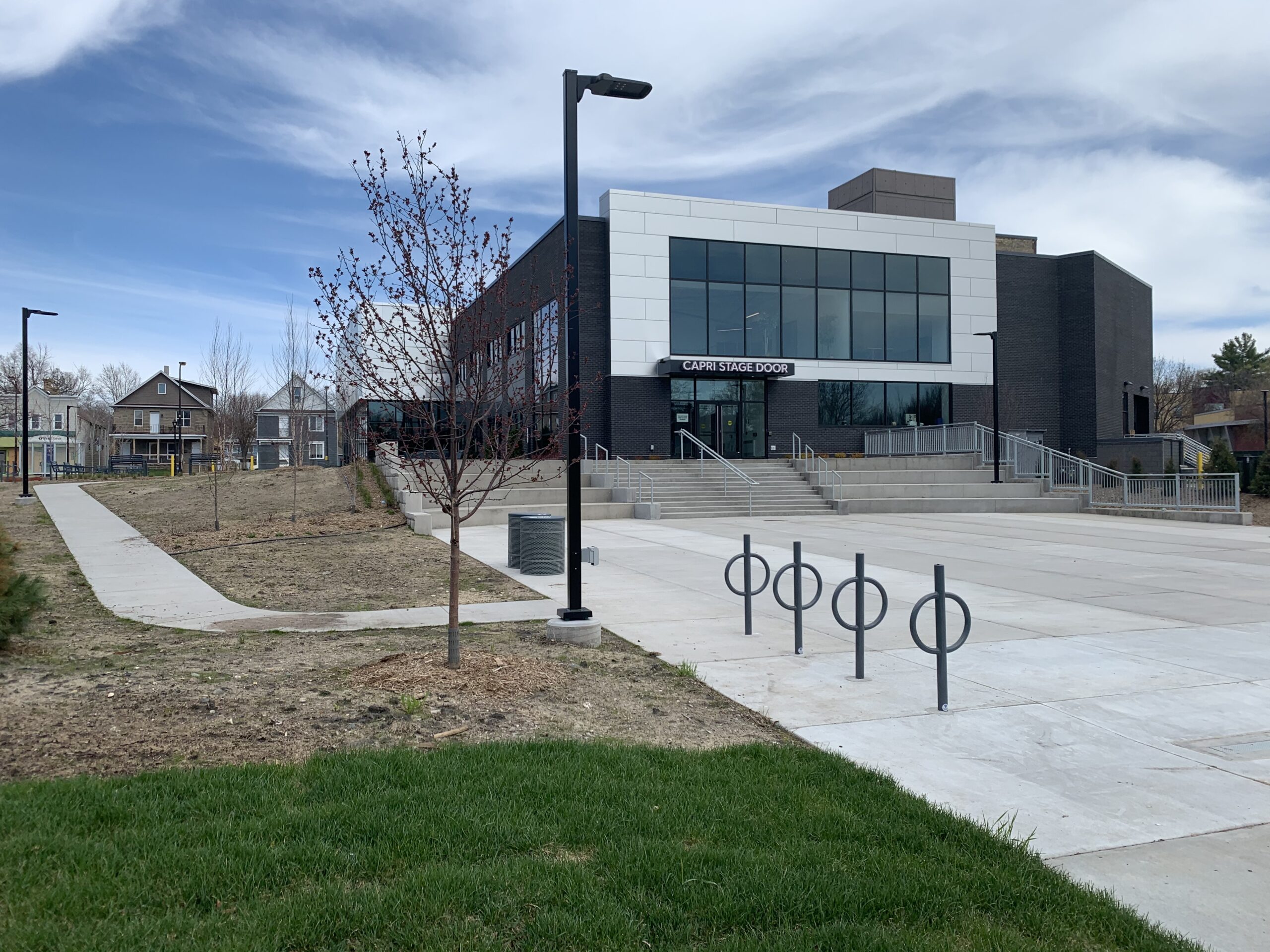 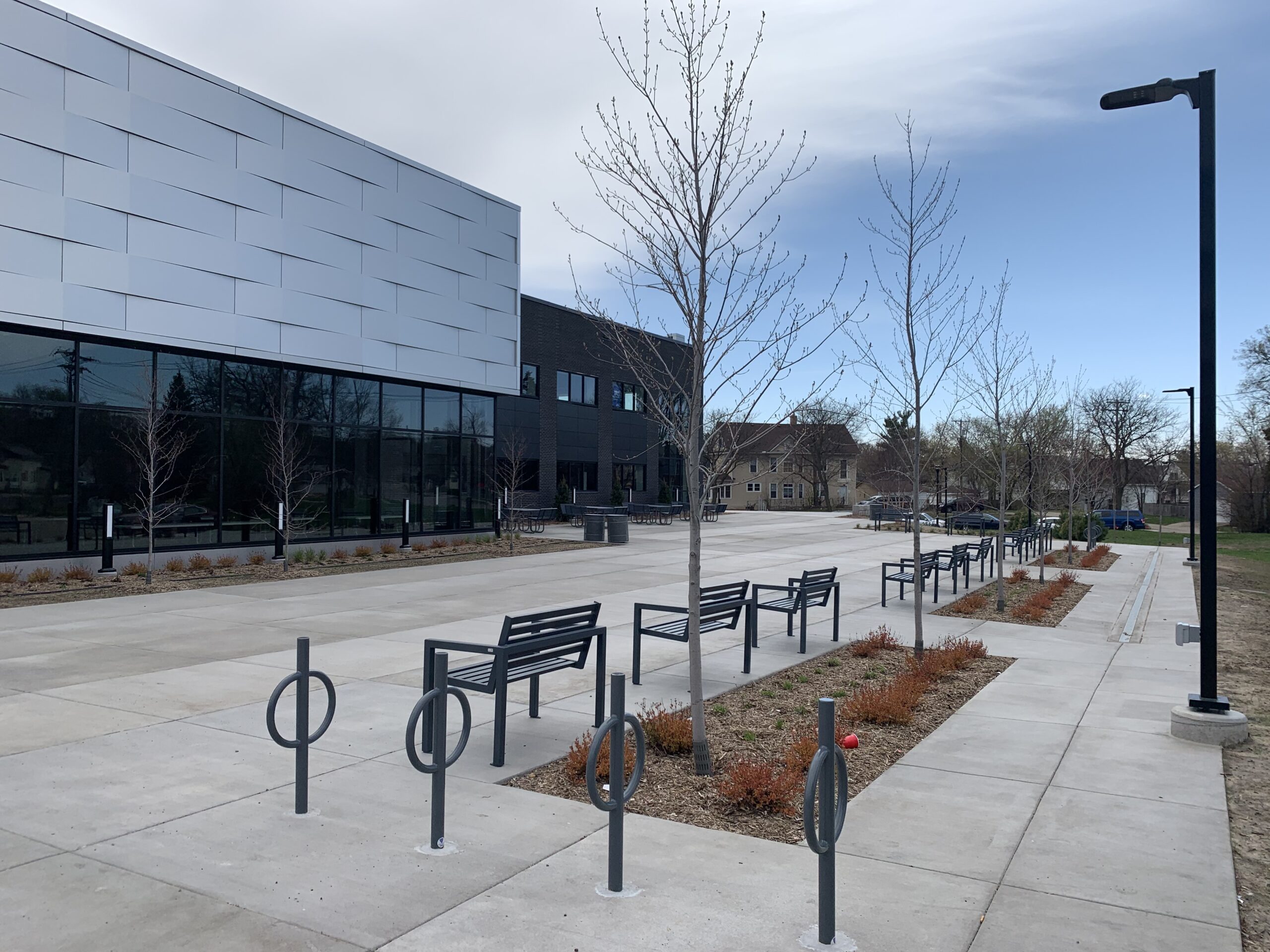 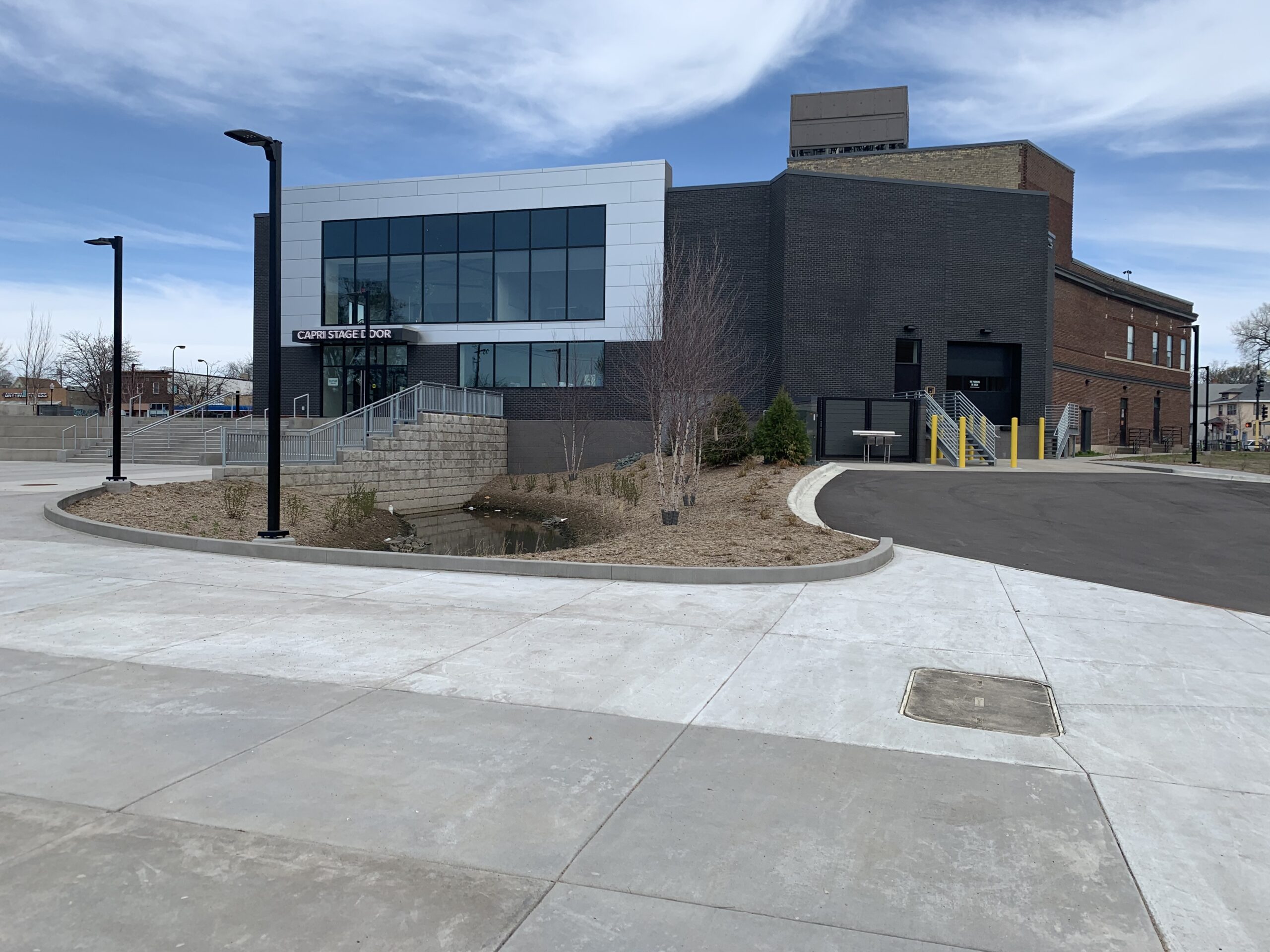 Élan Design Lab provided site design, civil engineering and landscape architecture services for the expansion and revitalization of this last remaining North Minneapolis movie house. Since 1993 the theater has been owned and utilized by the adjacent PCYC, an arts and technology based school. Through the acquisition of additional property from Minneapolis CPED and the vacation of the existing ally and Oliver Ave N the 1927 era theater has been expanded to provide a 256 seat main stage, 125 seat community hall, technology, dance, and recording studios as well as a variety of classroom and creative spaces.

The site features two public plaza’s designed by Elan– the upper plaza near West Broadway designed for larger gatherings and daily student small group use and the lower plaza with its bowed amphitheater seating and stairs for outdoor community productions and classroom instruction. Élan’s design team developed a stormwater management solution that utilizes a visually attractive arched biofiltration basin that mimics the shape of the adjacent amphitheater. Other site design activities included the conversion of vacated street into a green space for a future playground, reordering of site access routes and provisions for a bus drop off area on 23rd Ave N.